Will Bipartisanship Carry, or Will Elbridge Gerry? 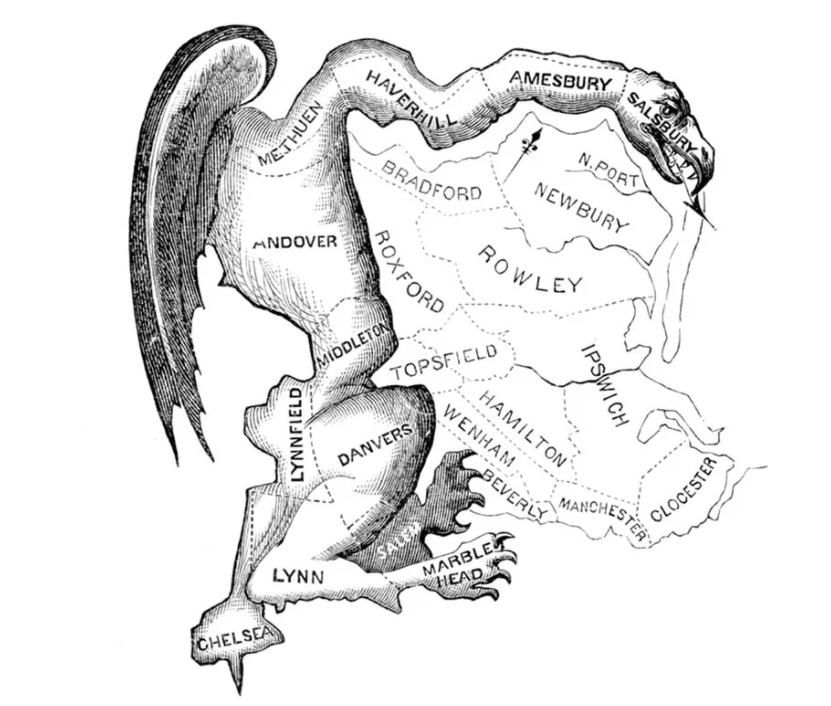 Some Torsion in This Year’s Drama-filled Apportion

Congressional Redistricting: What is it, and when it is happening?

The Constitution requires the U.S. government to hold a population census once every 10 years; a nearly complete accounting of every person who resides in the United States, and their age, race, occupation, residence, and relationship status. This census data, collected by the Department of Commerce, then informs us of who we are and where we are going as a nation, helps our communities determine where to build everything from schools to supermarkets, to homes to hospitals, and becomes a vital resource for the federal government to decide how to distribute funding and assistance to states and localities.

Among the many ways the decennial census impacts public life, none is more important than how an accurate count of the population serves as the basis for fair political representation in the House of Representatives, as the census allows the legislative boundaries within states to be redrawn to accommodate internal migration and growth within the country.

After every census, the data is used to change the number of seats each state has in the House of Representatives to better reflect their share of the population, which also directly impacts the number of electoral votes each state has in presidential contests. Using this data, every state with more than one representative in the House must redraw its Congressional boundaries. In some states, this is done primarily through a nominally non-partisan commission, but, in others, it is controlled entirely by the state’s legislature as an exercise in political power to maximize the number of safe seats held by members of the same party.

Because there are only 435 seats in the House at any given time, redistricting is strictly a zero-sum game. After careful review, we wanted to highlight both the winners and losers at the state and district levels of the 2020 redistricting cycle.

Winner: The state of Minnesota

Leading up to the public unveiling of the 2020 census results, Minnesota had long been projected to lose its 8th seat for the first time since the 1960s; however, when the results came in, Minnesota was able to hang on to it by a narrow margin of 89 people, with New York instead failing to grab the final seat. As for the districts themselves within the state, Minnesota currently operates under a divided government, therefore the Republican majority in the state Senate and Democrat majority in the state House are not likely to agree on a map that Democrat Gov. Tim Walz will sign. The state legislature's inability to agree upon a Congressional map will force courts to redraw Minnesota’s districts this cycle, a task they are experienced in doing, as courts crafted the eight current districts the state has been using for the last 10 years.

Over the past decade, there have been two major trends in Ohio: a population growth rate that has failed to keep up with the national average, and a sharp turn towards a more Republican electorate. This has resulted in a current split of 12R-4D in the House delegation for Ohio; however, if the most recent districts signed into law by Gov. Mike DeWine (R) survive a court challenge, it will become far more one-sided. Democrats have been effectively packed into two districts centering around Cleveland and Columbus, and while there are two nominally “swing” districts, in the current political environment, these districts will be reaches for Democrats as well. Coupled with the elimination of Rep. Tim Ryan’s (D) district due to the loss of a seat, the Democrats are starting at a 13-2 disadvantage in one of the most effectively gerrymandered states for Republicans in the country.

Reps. Spanberger and Wexton were viewed as potential Democratic casualties of redistricting in Virginia; both currently represent swing districts, and likely would have been guaranteed a safer seat with a potential Democratic gerrymander had Democrats maintained sole control over the redistricting process. Even as Democrats lost that luxury, the new districts recently approved by the Virginia Supreme Court can be seen as a win for both lawmakers. Spanberger’s district will move from a Republican-leaning R+3 district to a slightly safer D+1. Wexton was also spared the chopping block when her district only shifted from D+6 to D+5. Rep. Elaine Luria (D-VA) was not as fortunate, as her district moved from R+1 to R+3, and she can now be viewed as the most vulnerable of the three incumbents in 2022.

Much like Ohio, demographic shifts and a lost seat have made life difficult for the minority party in Illinois. However, in contrast to their midwestern neighbors, Illinois is a heavily Democrat-leaning state, and they have installed a gerrymander to further cement their advantage. A previous 13D-5R map is being condensed to a 14D-3R version. Reps. Rodney Davis (R) and Mary Miller (R) will have a battle of incumbents in the primary. The redone 13th Congressional district shifts from an R+4 to a D+4, and Rep. Cheri Bustos’s (D) seat moves from R+2 to D+3. All hope is not gone for Republicans in the state in the near future. The 13th and 17th districts are both very narrowly Democratic-leaning and could fall in a wave election, making the map a far more palatable 12D-5R for Republicans.

Democrats in New Mexico completed a successful gerrymander to target “Little Texas,” the sparsely populated and oil-rich section of the state, by dividing it among three districts. This move substantially endangers New Mexico’s only current Republican Representative, freshman Yvette Harrell. Her 2nd Congressional district moves from an R+8 to a D+2 and may be hard to keep, even in a Republican wave election.

Even with unified control of New Jersey, Democrats in the state faced a difficult task. Their 10-2 advantage in the House of Representatives includes four Democrats representing swing districts. In a wave year for Republicans, all three could fall, giving Republicans a 7-5 advantage in the blue stronghold. Democrats in Trenton elected instead to sacrifice one of the four in order to solidify the other three districts, cementing a much more likely 9D-3R advantage. Reps. Andy Kim, Mike Sherrill, and Josh Gottheimer all had their swing districts move five to eight points further to the left; however, this came at the expense of Rep. Tom Malinowski. Malinowski’s district has shifted from D+1 to R+2; not an insurmountable disadvantage, but in a year that could see several Democrat incumbents lose, it represents a prime target for the GOP.